Haiphong is one of five national grade I cities, a third big city of Vietnam together with Hochiminh City and Hanoi. It is situated on the West of Tonkin Gulf – a big gulf in the South-East Asia and the North-Eastern coast of Vietnam. Just 102 km to Hanoi and 200 km from Vietnam-China border gate, Haiphong is seaport city, the main gate to the sea for Northern provinces and key transportation hub of the Northern provinces and the Nation.

The location of Haiphong carries itself economical meanings as the central of Western Economic Belt in the Tonkin Gulf (Haiphong, Quangninh) and economic central in Northern coastal areas (Quangninh, Haiphong, Thaibinh, Namdinh, Ninhbinh); a centre of urban chains: Haiphong-Haiduong-Hanoi-Viettri-Yenbai-Laocai (Vietnam)- Mengzi-Kunming (China). Besides, Haiphong is also the important point of “Two economic corridors – One economic ring” between Vietnam and China. 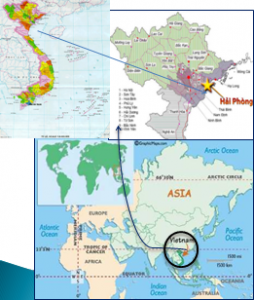