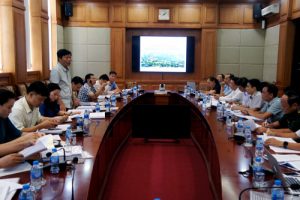 Scene of the meeting

Construction investment project to renovate and enhance K15 Pier monument complex in Do Son district has a land use area of 3.86 ha, including the current land area of 9,034 m2, the reclaimed land area of 22,214 m2, the water surface area of 7,329 m2, in the territory of Van Huong ward (Do Son district). The total estimated investment is 187,479 billion dongs from the city budget. Project implementation period: 2019 – 2021. After completion, the project will preserve, renovate and promote the value of the national historical monument of Numberless Pier K15, which is the starting point of the Ho Chi Minh trail at sea, ranked by the Ministry of Culture – Sports and Tourism as a national historical site in 2008; build synchronously in terms of architecture and landscape in order to pay tribute to the heroes and martyrs; is a place of political, cultural and tourist activities of Do Son district, Hai Phong city and the whole country; contribute to the education of revolutionary traditions, patriotism and national pride for the younger generation; promote local socio-economic development.

The Economic and Budget Commission of the City People’s Council affirmed that this project is of great significance and needs to be invested in a way worthy of the historical and cultural significance of the monument, corresponding to the locations of Ho Chi Minh trail at sea, is a specific project, and needs to be implemented and completed by 2021; recognized that the investor has actively prepared the project investment, ensuring being accordance with law.

The Economic and Budget Commission requested the investor to coordinate with the city’s functional departments to collect the delegates’ opinions to continue reviewing and adjusting the project; pay attention to adjusting the 1/2000 planning of Do Son district and the 1/500 planning, avoiding overlapping with the area assigned to the Casino; the architecture of the project’s work items should be recruited and consulted extensively to elevate the monument and tourism; research and build temples of specific martyrs, reasonably add waiting houses to visit the monument in its whole; consider supplementing the socialization funding to build a number of work items; coordinate with the Navy’s High Command to collect meaningful historical artifacts of the numberless ships; urgently complete the documents to submit to the 10th meeting of the XV Session of the City People’s Council for consideration and decision.