(Haiphong.gov.vn) – In the afternoon of May 21, Permanent Vice Chairman Nguyen Xuan Binh of the City People’s Committee carried out a field inspection of the implementation progress of the Construction investment project of Binh bridge’s Southern traffic Intersection. Accompanying him were representatives of relevant departments, agencies, units and localities.

Construction investment project of Binh bridge’s Southern traffic Intersection is a key traffic infrastructure project of the city, according to the Project Management Board’s report, up to this point, the total ground area handed over for project construction has reached 72.83%; the contractors have constructed the underpass and overpass items of branches with a total accumulated volume of about 30.72%… 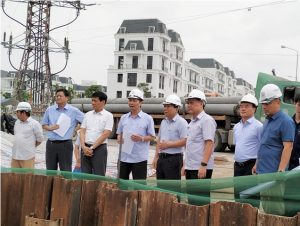 Speaking at the construction site, Permanent Vice Chairman of the City People’s Committee – Nguyen Xuan Binh highly appreciated the active participation of the Management Board of the Construction investment projects of Hai Phong transport works, immediately after consolidation, the organization took the initiative to reviewing the entire work progress to deploy appropriate construction plans. However, facing a current construction volume of only over 30%, the Project Management Board along with the construction contractors and related units from now to the end of the year should try to focus on implementing the project at the highest level, at the same time must ensure absolute technical requirements as well as the quality of the project, the Permanent Vice Chairman emphasized.

The Vice Chairman also noted that the Project Management Board should continue to work closely with the Ministry of Transport, the Vietnam Railway Department and the Vietnam Railway Corporation to handle issues related to the construction of rail tunnels, widening of crossroad barriers, undergrounding railway signaling information system. At the same time, the Department of Transport was assigned to research the construction investment of the route connecting Binh bridge’s southern Intersection to the 4-way Ton Duc Thang – Mang Nuoc – NR. 5 intersection; additionally, taking advantage of favorable weather to arrange human resources, mobilize equipment to accelerate the project construction progress.

SEVERAL KEY WORKS TO BE COMMENCED IN MAY