(Haiphong.gov.vn) – In the afternoon of June 6, Permanent Vice Chairman Nguyen Xuan Binh of the City People’s Committee together with leaders of related Departments, branches, localities and on-site units checked the implementation progress of the Construction investment project of Binh bridge’s Southern traffic intersection.

This is a key transport infrastructure project of the city with the goal of striving to be completed and put into use by the end of 2019, but at this time, the clearance work does not meet general progress requirements. Currently, the ground area handed over for the project is more than 85,132m2 (reaching 72.95%). 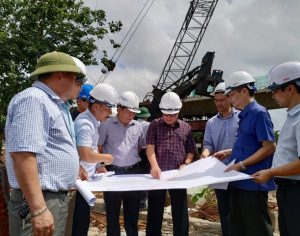 Directing at the project site, Permanent Vice Chairman Nguyen Xuan Binh assessed that although the local branches had made great efforts, the clearance work was unsatisfactory. The Vice Chairman asked Hong Bang district to urgently review, and at the same time coordinate with functional agencies and the Office of the City People’s Committee to thoroughly solve the problems and issues related to land clearance.

As for An Duong district, up to now, clearance work had been behind schedule versus commitment, affecting construction progress of contractors. The Permanent Vice Chairman requested Comrade Secretary, Chairman of An Duong district to directly inspect and direct the clearance work, and at the same time be responsible to the Chairman of the City People’s Committee on this issue.

For the Project Management Board, continue to closely follow and work with the Vietnam Railway Department to resolve procedures related to the organization of construction of railway overpass and underpass items to ensure progress of the project.

The Permanent Vice Chairman assigned the Department of Transport to coordinate with the Project Management Board to urgently carry out the appraisal and submission for approval to soon start the Construction investment project of the route connecting from Binh bridge’s Southern intersection to the 4-way Ton Duc Thang – Mang Nuoc – National Road 5 intersection according to the direction of the City Standing Committee and the People’s Committee. In addition, the Permanent Vice Chairman also noted that the construction contractors, during the construction process, must absolutely ensure issues of safety, traffic order and safety, environmental sanitation in the project construction area…

Binh bridge’s Southern Intersection Project is a grade II traffic project whose scale includes: the main item is a direct overpass in the direction of Binh bridge, ring road 2 and an underpass in the direction of Bach Dang – Hong Bang will have a grade separation with Hanoi – Hai Phong railway at the position of Km98+090 (overpass), Km98+250 (underpass) and maintain a current level crossing at Km98+250 to serve vehicles from Hong Bang street to Hung Vuong street going to Hai Phong city center and vice versa.