(Haiphong.gov.vn) – In the afternoon of June 7, Vice Chairman of the City People’s Committee Nguyen Dinh Chuyen was briefed on the progress of the implementation of the Construction investment project of a coastal road section running through Hai Phong city and 9 km in Thai Binh province in the form of public-private partnership PPP and the Construction investment project to renovate and upgrade the Mang Nuoc route from the pillars Binh bridge to 359 road in Nui Deo town, Thuy Nguyen district . Attending the meeting were leaders of related Departments, branches, localities and units. 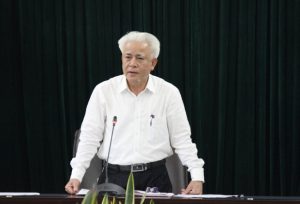 According to report from Project Management Board, for the Construction investment project of coastal route, in Hai Phong area, 1,485/1,523 households (reaching 97.5%) have been approved, 1,445/1,526 households have been paid (reaching 94%). Currently, the clearance plan of 68,191.52m2 has not been approved, involving 38 households.

Regarding construction, localities are organizing excavation of road form, spreading geotextile and filling sand for roadbed; for Van Uc bridge, 4 construction teams are being organized; for Thai Binh Bridge, the side of Thai Thuy district, Thai Binh province, preparation and mobilization of machinery and equipment are being performed to begin construction in June 2019. Up to now, the estimated construction volume is VND 160 billion (about 6.4% of the construction value).

For the concluding direction at the meeting, Vice Chairman of the City People’s Committee – Nguyen Dinh Chuyen suggested that Departments and agencies together with the Investor and related localities continue to speed up the clearance progress, and focus on solving issues and problems arising. The Vice Chairman also asked localities to continue propagating and persuading people to resettle with money, in case households did not accept resettlement with money, Investors and People’s Committees of districts should actively study the arrangement of resettlement land, set up resettlement projects according to regulations. Regarding construction work, the construction contractors must gather human resources and construction facilities to accelerate the work construction in accordance with the signed BOT contract.

Regarding the implementation progress of the Package of construction and equipment installation, soft soil treatment, geotextile spreading, black sand layering and surcharge load filling have been implemented at the designed locations with the length of the route of about 1.2km. The value of completed construction volume is estimated at 48.5 billion VND (equivalent to 23.5% of the contract value).

Regarding the Construction investment project of resettlement area for clearance, synchronous new construction investment, technical completion of 2 resettlement areas with a total area of 125,481.42m2 serving clearance for the Project, currently, 347/347 households with agricultural land have been accounted, procedures are being completed to pay clearance compensation for the remaining households; construction drawing design documents and cost estimates are being appraised at the Department of Construction for approval according to regulations.